Greece Has ‘Defied the Odds’ in the Pandemic

The Greeks have been dogged by years of instability, but their government’s response to the coronavirus has won praise from citizens. 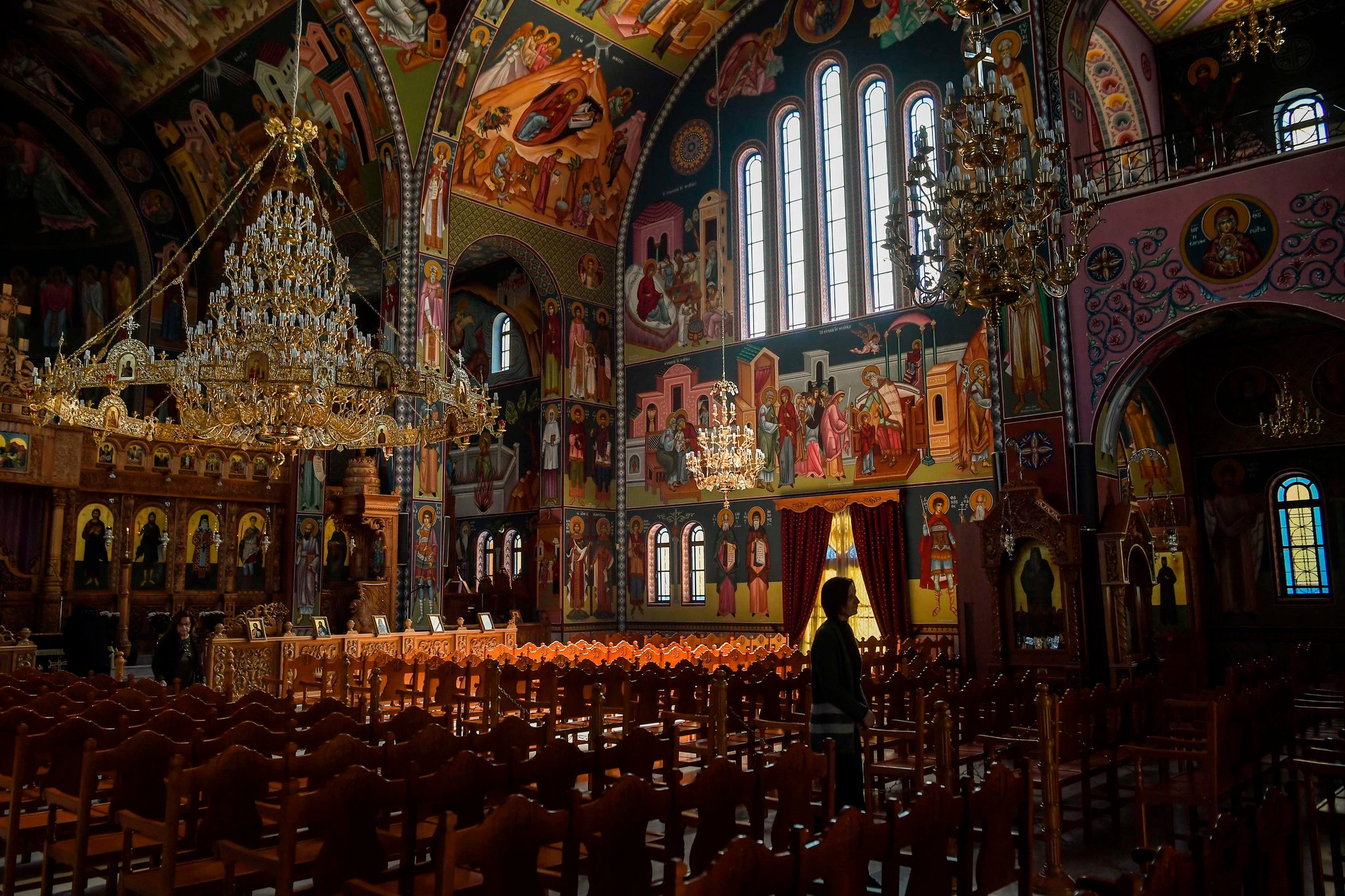 THESSALONIKI, Greece — For years, Greece has been seen as one of the European Union’s most troubled members, weighed down by a financial crisis, corruption and political instability. But in the coronavirus pandemic, the country has emerged as a welcome surprise: its outbreak appears to be far more limited than what was expected.

As the virus spread across Europe, many Greeks feared the worst: They would be the next Italy or Spain.

After all, the country’s health care system had been weakened by a decade-long financial crisis. And Greece has one of the oldest populations in the European Union, second only to Italy, leaving it more vulnerable to the disease.

But the number of reported deaths and people in intensive care because of the virus in Greece has remained a tiny fraction of what they are in many other European nations.

Now, a country that has grown used to being seen as a problem child in the European Union is celebrating its government’s response and looking forward to reopening its economy.

“Greece has defied the odds,” said Kevin Featherstone, director of the Hellenic Observatory at the London School of Economics.

Because Greece has tested a very small percentage of its population, it is impossible to know how extensively the virus has spread in the country. But its total deaths have been low — 138 in a population of about 10.7 million — a surprise to experts, especially given the elderly population. And a big relief.

On Tuesday, just over a month after the government imposed a lockdown, the prime minister announced a time frame for gradually easing restrictions and getting the country back on its feet. 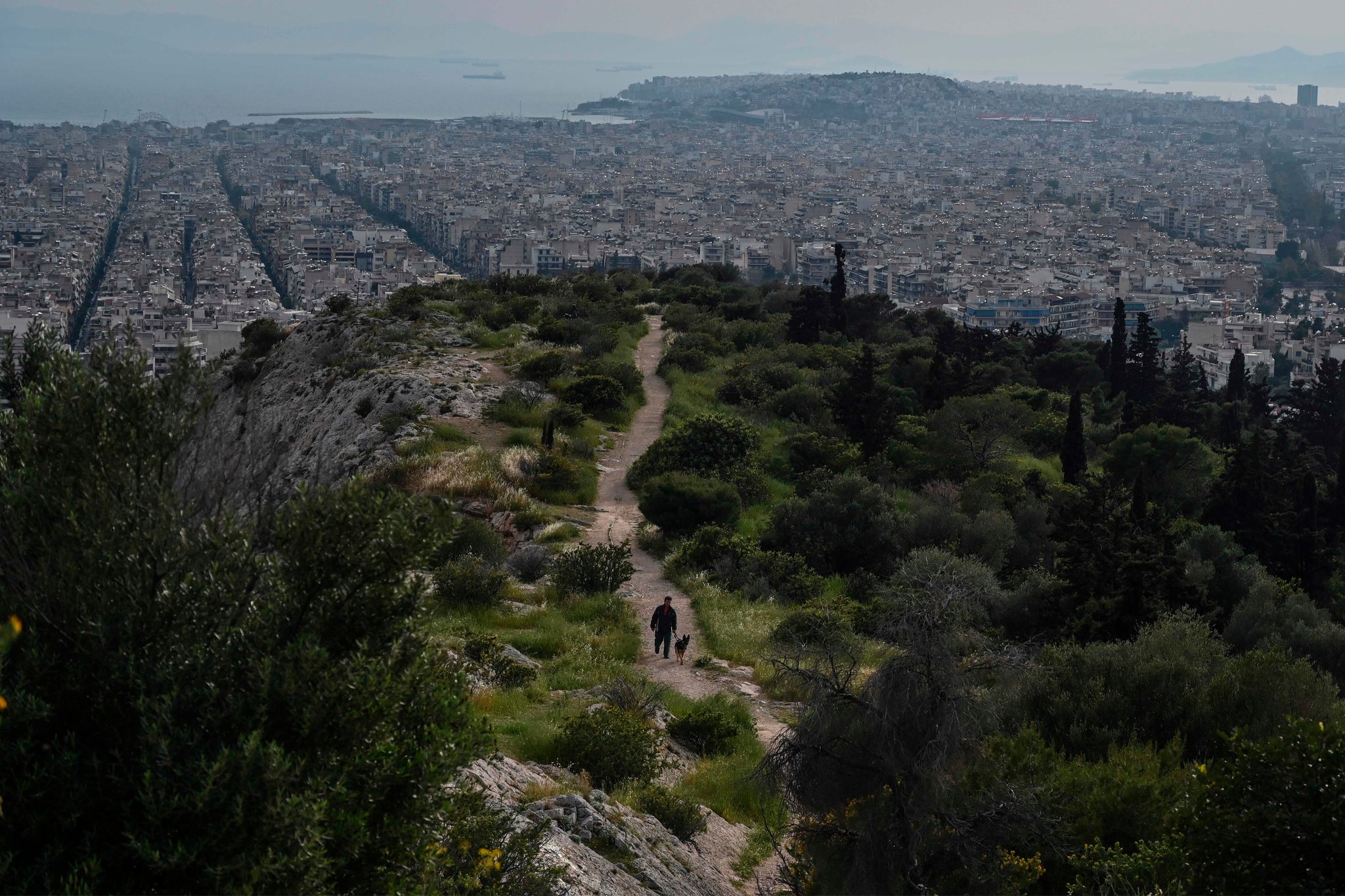 A view of Athens from Filopappou Hill. Greeks are required to notify the government whenever they leave their homes, even just to walk the dog.Credit...Louisa Gouliamaki/Agence France-Presse — Getty Images

Only 69,833 people have been tested for the virus in Greece, but experts agree that the country’s decision to quickly enforce social distancing measures and fortify its ailing health care system helped curb the outbreak.

So did a willingness from most Greeks to comply with the orders.

On Feb. 27, a day after the country’s first Covid-19 case was diagnosed in Thessaloniki, Greece’s second- largest city, the government canceled the annual Carnival. On March 11, it closed down schools. Two days later, Greece limited nonessential travel and closed down cafes, restaurants, libraries and museums, among other places.

Soon, anyone who came from abroad had to go through a two-week mandatory quarantine or risk a fine of about $5,400. Everyone in the country was required to notify the government each time they left their homes, even if it was to walk the dog.

“We consciously preferred to make a significant financial sacrifice rather than sacrifice human life,” he said.

As of this week, there have been 2,566 coronavirus infections reported in Greece. Belgium, by comparison, has reported 47,334 infections and 7,331 deaths, even though the countries have a similar population size.

Beginning in February, Greece worked to quickly increase its intensive care beds by more than 70 percent and recruited 3,337 additional hospital staff members, said Vassilis Kikilias, the health minister. It has also opened up 2,500 more hospital worker positions and plans to hire 942 additional doctors, a spokesman for the ministry of health said last week.

“The mobilization was very fast,” said Anastasia Kotanidou, associate professor at the Critical Care Department of the University of Athens and the president of the Greek Intensive Care Society. Without it, she said, the health care system would not have been able to handle the outbreak. 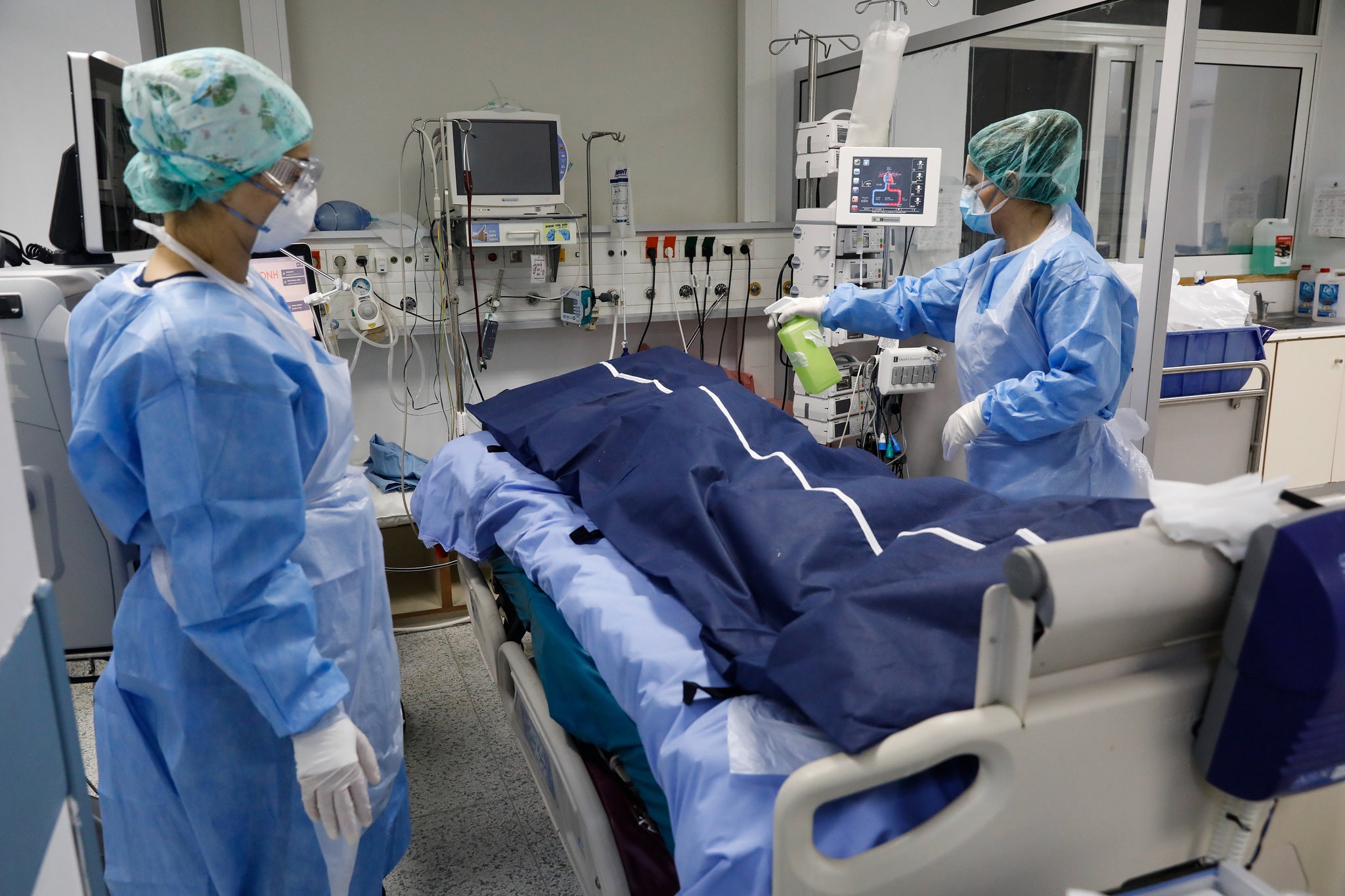 Medical workers disinfected a bag holding the body of a patient who died from the virus at a hospital in Athens.Credit...Giorgos Moutafis/Reuters

Across the country, many Greeks were quick to accept the new normal, even foregoing things like gathering in groups to roast lamb on Orthodox Easter. That might have been unthinkable just months ago.

A recent poll found that the two most popular people in the country are Sotiris Tsiodras, a soft-spoken infectious disease specialist at the University of Athens, and Nicholas Hardalias, the deputy minister for civil protection. The doctor and the politician host daily virus briefings in Greece, and it has become must-watch television.

Mr. Featherstone said that the government had “followed the science” by making Dr. Tsiodras the lead on policy, and that giving Mr. Hardalias the power to oversee the country’s response to the outbreak helped ensure things ran smoothly.

“Neither of these actions are typical of Greek governments when faced with challenges,” he said. They seemed to reflect the business background of Prime Minister Kiriakos Mitsotakis, a former financial analyst, he added.

Pavlos Eleftheriadis, a retired stage director at the national theater in Northern Greece, said he was pleasantly surprised by the government’s response to the outbreak.

“I felt pride that there is a state,” said Mr. Eleftheriadis, who is from Thessaloniki. “There are politicians who listen to the scientists.”

But for all the government’s successes so far, it has faced some criticism.

Less than 1 percent of the population has been tested for the virus in Greece, raising concerns about the accuracy of its numbers. Testing has been focused on people admitted to hospitals with symptoms and those who have been in contact with confirmed cases, according to the health ministry spokesman. People coming into the country from abroad are being tested as well.

There have also been multiple coronavirus outbreaks in the country’s cramped and unsanitary refugee camps. And despite calls to evacuate them, few migrants have been released, raising alarm among critics. 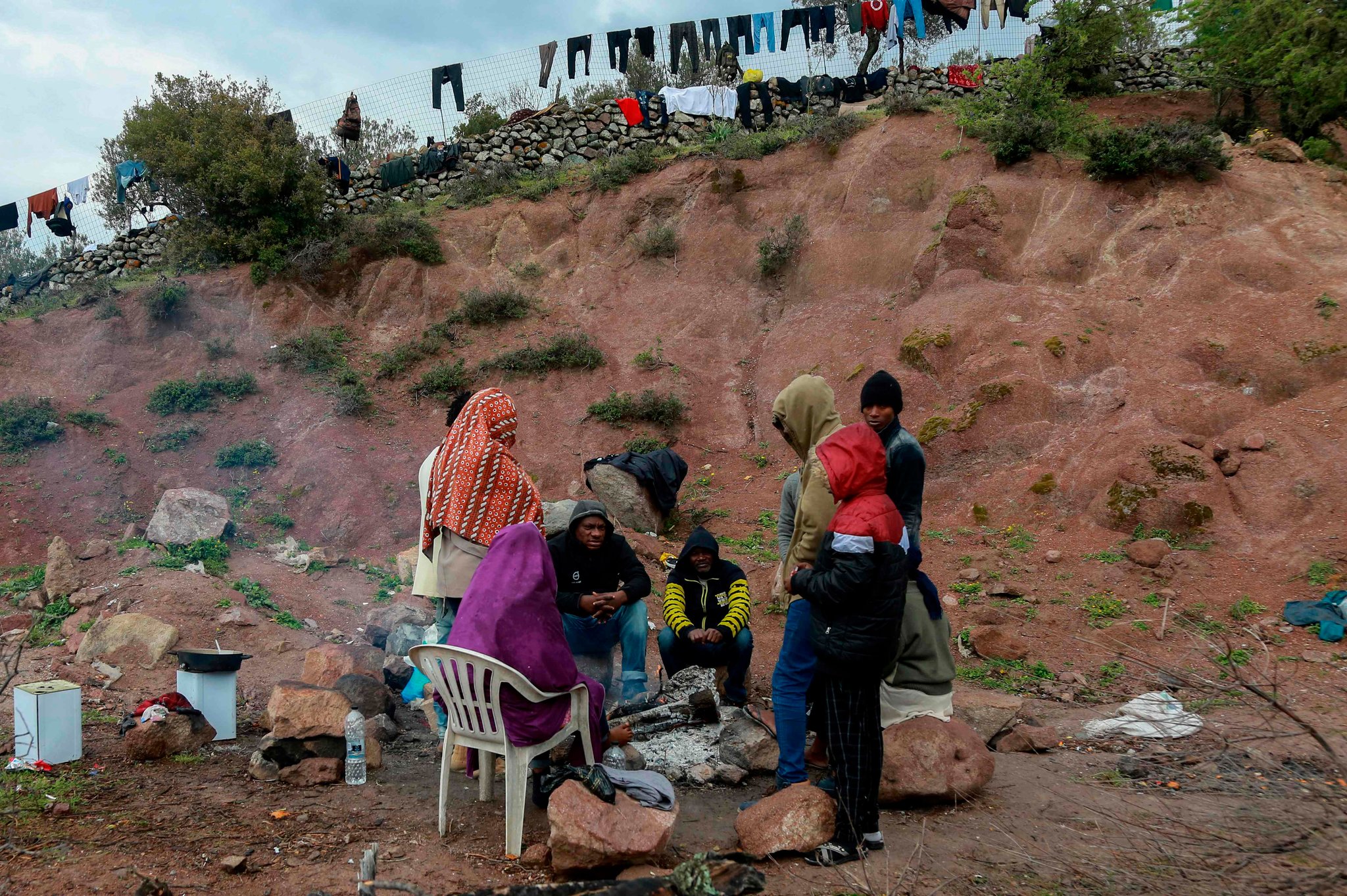 Newly arrived migrants from Africa under quarantine in an open space designated by the Greek authorities on the island of Lesbos.Credit...Manolis Lagoutaris/Agence France-Presse — Getty Images

At least 150 people at a hotel being used to house hundreds of migrants tested positive for the virus this month. The migrants were tested only after a hotel employee, her husband and a pregnant woman from Somalia, who was also a migrant, tested positive, local media reported.

And some have raised concerns about reports of abusive behavior by police officers enforcing the country’s lockdown rules, including the use of excessive force.

Fani Kountouri, assistant professor of political science and political communication at Panteion University in Athens, said the current satisfaction with the government could easily disappear, depending on how the country manages the financial impact of the pandemic.

Tourism, which accounts for 18 percent of the country’s G.D.P., is expected to be one of the hardest-hit sectors in Greece, which was just recovering from the financial crisis that began in 2009.

On Tuesday, Prime Minister Mitsotakis announced that, starting on May 4, bookstores, hair salons and some other shops will reopen, and that Greeks would no longer have to notify the government before leaving home.

Churches will also reopen for personal worship. High schools will reopen later in May, while restaurants and hotels that operate year-round will most likely begin operating again on June 1, Mr. Mitsotakis said.

For now, some Greeks are proudly cheering their country as a rare success story in the European Union during the pandemic.

Costas Thimioudis, a 50-year-old taxi driver in Thessaloniki, said he was no fan of the Greek government but approved of its actions. “The government took measures earlier than the rest of Europe,” he said.

“Some Europeans did not hold us in high esteem,” said Costas Hatzopoulos, 54, an agronomist who is also in Thessaloniki. 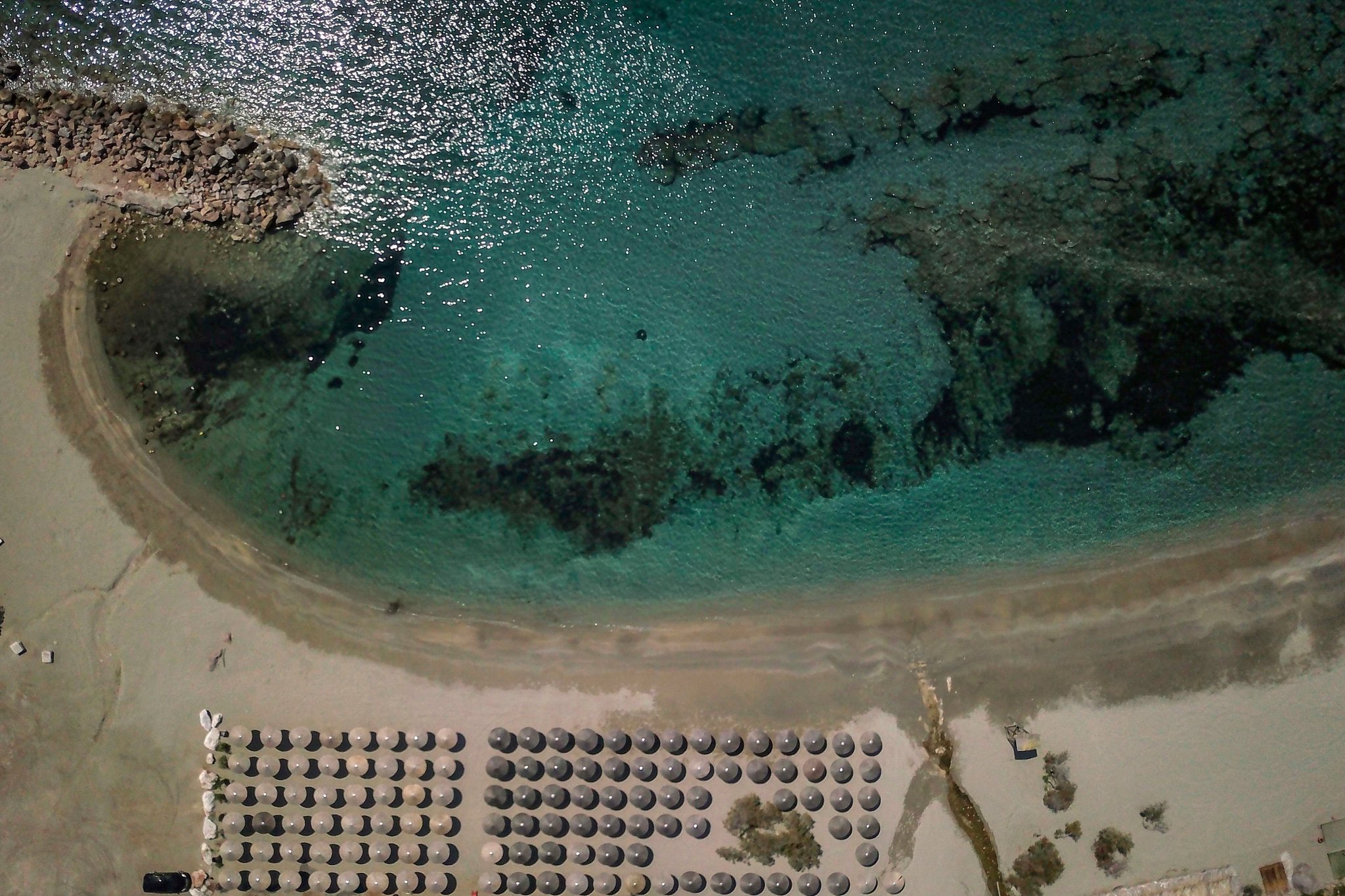 An empty beach near Athens. Tourism accounts for 18 percent of the G.D.P. in Greece.Credit...Aris Messinis/Agence France-Presse — Getty Images