Night of Poetry in Memory of Greek Poet Manolis Anagnostakis 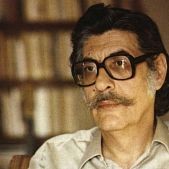 One of the most important Greek poets and essayists of the post-war period is Manolis Anagnostakis (1925-2005), who has been characterized and is known as “the poet of defeat”, as his poems captured the refutation of the visions of the Left. He himself, however, said that “It is not poetry of defeat, but an agony and anxiety for the time”.
In this context, he was considered a purely political poet, but as it can be seen by his work, he is both political and erotic. In his own words: “There were politics in the poems, the expression of politics, but through an erotic situation”.
Eventually, he published 88 poems, written from 1941 to 1971. Many of them were translated into English, French, German, Italian, and set to music by important composers such as Mikis Theodorakis, Thanos Mikroutsikos and others. Anagostakis was awarded the State Poetry Prize in 1986 and the Grand Prize of Literature in 2002.
The poet was born and lived in Thessaloniki where he studied medicine, while as a student he had intense political activity, for which he was imprisoned in 1948 and even sentenced to death. In 1951, however, he was released. He continued to write poems, and also in magazines, while he also published his own magazine “Critic”. His wife was Nora Anagnostaki –who was also from Crete and Minor Asia– one of the most important essayists, translators and literary critics in Greece.

Although it is not widely known, the origin of the poet is from Rethymnon and specifically from the village Roustika (20km from the center of Rethymnon), where his paternal house is still preserved. The poet donated it to the Municipality of  Rethymnon in order for his village to acquire a cultural center. Thus, in 2010 the Cultural Center and Library of Anestis and Manolis Anagnostakis started up, where every year on the 1st and 2nd of August an event is organized in honor of the poet. It is attended by distinguished academics and scholars of his work from all over Greece, as well as musicians and actors.

This year marks the tenth anniversary of the Center’s establishment and, despite the difficult conditions we are all experiencing due to COVID-19 pandemic, the poetry event will take place on Saturday, August 1st, 2020, at 20:00 p.m. in Roustika, Rethymno.